Press features have raised profile for my fundraising. Events have been important milestones for boosting fundraising for my charities. They have been big and small and always with the community at the heart of them. Its been loads of fun to date and there are more in the coming weeks and months. Have a look! 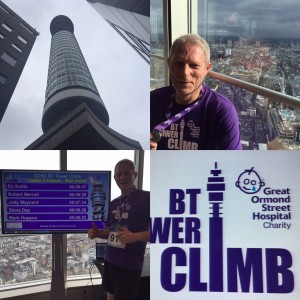 My personal trainer (I know get me!) Sarah recommended stair climbing as part of my day-to-day training and preparation. The BT Tower climb caught my eye as it involved 834 steps over 34 storeys in one of London’s iconic buildings from the time when I was born, glorious  1967! What a day, first of all I forgot my medical letter so had to go back to St Albans to get it – doah! But wow it was worth it, the short flight steps are the emergency exit route for the tower. I ran two steps at a time,  I missed the water station at floor 16 and got to the top in a respectable 8m47s. Great support from the GOSH team and camaraderie amongst fellow tower climbers made the day! Superb views across the city and a celebratory chocolate bar before taking the speedy lift back down to join the rest of the family in the Science museum.

At the time I got to the top the fastest climb was in 5m10s (rocket man surely?)!! 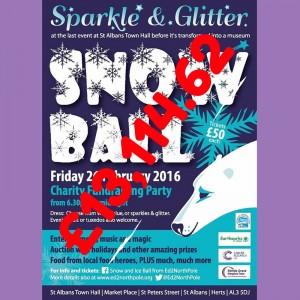 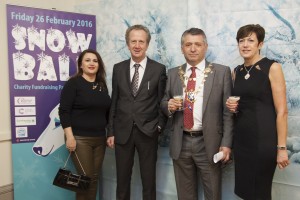 The Snow Ball was the event to be at for sparkle and glitter. The last public event in the Assembly Rooms of the Old Town Hall, St Albans before it closes for the renaissance project to be converted into new museum and gallery facilities for this great city.

Over 115 guests including the Mayor and lady Mayoress were welcomed with Mokoko cocktails the specially made “Northside” polar drink, followed by a stunning menu from Gels at the Smokehouse Deli, St Albans. Music by MacClaren Wall eased us into the part atmosphere followed by the 35 lot charity auction of donated items. Finally the Desert Penguins helped us dance the night away. This crescendo fundraising event raised £13,114.62 for charity, thanks to all who donated, volunteered, helped keep costs low and bid on the fabulous auction items.

Polar Exploration talk to whole school of 180 children who had been doing a polar topic at school so had some great knowledge of explorers and the unique wildlife of the Arctic and Antarctic.

A warming evening at the family friendly Polar Bear curry night (no Polar bears were harmed) was had at St Albans first Indian restaurant opened in 1960 by the current owners father and uncle. The Koh-i-noor made us welcome with tasty treats such as chicken methi, tarka dahl, sag paneer and options for the children including poppadums, korma and tikka masala dishes. Thank you Nasar and team for hosting 30 hungry folk and helping us raise well over £100 for my charities.

Those wonderful people at the Halifax on St Peters Street, St Albans held a cake sale in branch from the 17 until 20 February 2016 during halfterm holidays. The supply of cakes was topped up by local volunteer bakers from supporters of Rennie Grove and Ed2NorthPole. A total of £704.92 was raised over the four days from customers of the branch and the Halifax donated a stupendous £500 match funding, giving a total raised of £1,204.92!! Thank you so much to Anita, Nelly, Lisa and the rest of the St Albans Halifax team, you sure do give extra!

Polar Exploration talk to the Y6 of 90 children who had been doing a polar topic recently school so had some great knowledge of global warming and the icecaps.

Polar Exploration talk to the Beaver Scouts with some great questions and good knowledge of Arctic wildlife including the narwhal!

Polar Exploration talk to the whole school of 220 children from nursery to Y6. The Schools competition was launched today to select a children’s design to go on to the flag I’ll take with me to the Pole. 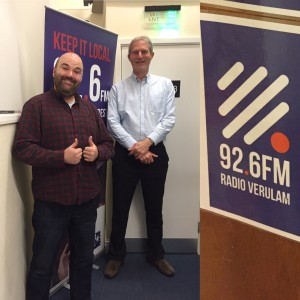 Interviewed by the Sandringham School news team as part of the BBC School News Report project. Great collaboration at the school between Y7 and sixth formers. The week before they had interviewed Major Tim Peake on the ISS click here so I was hoping not to be a disappointment after that fabulous experience!! 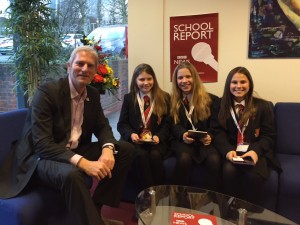 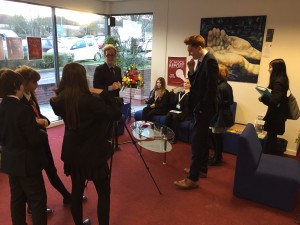 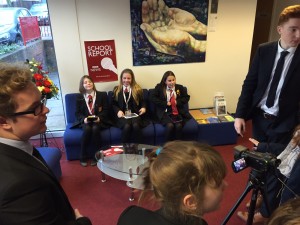 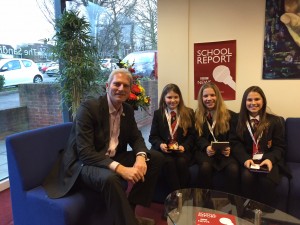 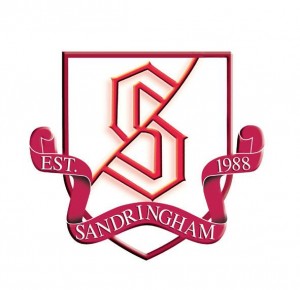 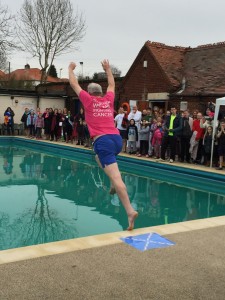 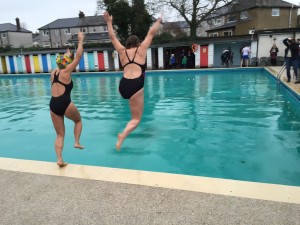 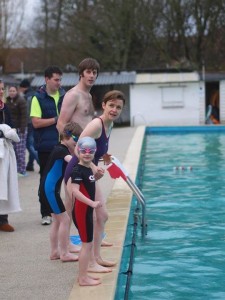 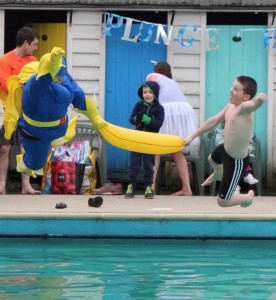 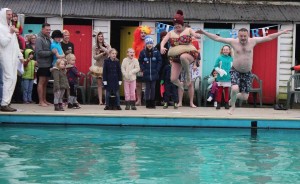 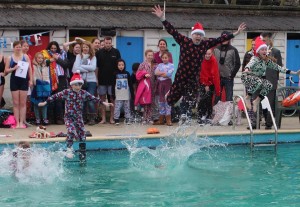 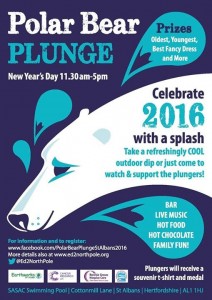 On the 1 January 2016 at the St Albans Sub Aqua Club pool on Cottonmill Lane was the venue for the inaugural St Albans Polar Bear Plunge! This was a chance for brave people to plunge into the icy water of the pool all to raise money for charity. The event attracted 151 plucky plungers ranging from 5 to 66 years in age and well over 150 spectators to cheer them on.

The event was opened by the mayor who led the countdown for Plunger no. 1 Ed Suttie to jump into the pool. The mayor also during his introductory speech indicated he was prepared to plunge into the pool only if he made a difference. He issued a challenge on the spot for fundraising which in 15 minutes had raised an extra £340 from those in attendance!

Hot baked potatoes, drinks, postcard sales, raffle, bar, glitter tattoos and a fabulous craft stall for kids all contributed to a bustling event that cheered the New Year in. Thank you to Sainsbury’s in Everard Close for part sponsoring the food. Musical entertainment was provided by an eclectic and entertaining mix of local talent thanks to Denise Parsons. All plucky plungers got a warming hot chocolate, a medal and T-Shirts will be on the way to them. Some were also recognised for their exceptional fancy dress costumes (from a penguin, some Santas, a troupe of snowman, a giraffe, Bananaman, a ghostbuster and even Buzz Lightyear).

There was even a crowdfunded project to get two warm water only swimmers from Arctic nations Chrissie Saunders (Canadian) and Birgir Scheving (Icelandic) to plunge into the icy pool. This raised an incredible £1115 extra for charity.

A huge thanks to all the volunteers and helpers from the charities, our neighbourhood and city and that contributed to the event raising a fantastic £5093.28 for charity.

The Polar PA (Ed’s wife Clare) worked tirelessly on organising the Plunge and following all the requests received it is set to become a regular fundraising St Albans event. Congratulations to all who plunged and cheered! 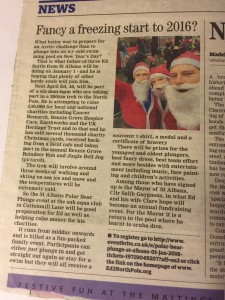 Guest of the UK Antarctic Heritage Trust at the opening of the Enduring Eye The Antarctic Legacy of Sir Ernest Shackleton and Frank Hurley at the Royal Geographical Society, Exhibition Road, London. This prestigious event was good exposure for me; I got to meet some very experienced polar explorers.