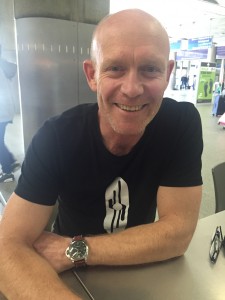 Eric Philips is the legendary polar guide behind Icetrek. I got to meet him in St Pancras station between a visit to Norway and having to leave for his flight from Heathrow back to Australia. A great chance to catch up and ask the man some questions:
The passion for polar guiding, how did it all start?
My parents are Dutch and the proximity to Scandinavia you’d think they have an affinity for the cold but they absolutely hate the cold! Where I got it from I’m not entirely certain, but as a child I loved the look of polar photographs and the National Geographic and I always wanted to go to Antarctica so part of that journey was being in the outdoors, camping, hiking, bush walking and eventually skiing. It got to the point where I thought I could really study this as a vocation and studied outdoor education and taught for many years in Australia. And at the end of that I needed to give up teaching and get outdoors and become a polar explorer!
When did you first reach the North Pole and South Pole, which came first?
South pole was first 1998/99 we flew from Christchurch New Zealand to McMurdo station in Antarctica and from there skied across the Ross ice shelf for 50 days. Then we pioneered a new route up the Shackleton glacier, a great name Shackleton something that’s really important to me that it had a sense of history. We then reached the plateau and another 20 days or so to reach the South Pole. Strangely enough I think I still hold the record for the slowest ever expedition to the South Pole!! Even Scott was faster than us reaching the pole back in those days!
The North Pole I reached in 2002 and then I started guiding in 2004 and have guided expeditions to the South and North poles annually since and have now been to the North and South Pole about 20 times or so. It’s in my blood, it’s in my psyche I love it I am passion about it and here I am talking to a guy that’s going to do it with me next year.
In all those expeditions there must have been a few wild encounters or moments that you thought “That was a bit close”?

A few, some of those have been solo experiences when climbing in New Zealand an epic place to climb in the New Zealand alps a place where you can come unstuck. My most memorable experience is a polar bear experience skiing to the North Pole. 2002 on the way to the pole with a very good friend of mine John Muir about two weeks into the trip towards the end of the day and John who was ahead at the time said “Eric what’s that on the horizon?”. At the time it looked like a moving white thing, not very clear at all. Eventually it morphed into arms and legs and this big hulking body and the big black dot in the middle of the head could be seen, the nose. Polar bear. And all this time it was like slow motion national geographic style footage as the bear came bounding across the ice sprinting towards us. We realised we had to do something pretty quick. We got ourselves settled, fortunately the bear stopped 20m short of us, by then we’d armed ourselves with a Magnum 44, we had flares ready. The bear didn’t approach any closer but it stood, wiggled, sniffed the air and pawed the air. Then it circled around us and got down wind of us took one whiff of us and ran away thankfully. It was a real passive encounter between two of earths great creatures. We both went our parting ways.

We do take a rifle with us on this expedition. Encounters with polar bears that far north are very rare as it is still quite early in the season and it’s a long long way away from where they hibernate and have their dens. Sightings at the North Pole have occurred, but it’s rare.